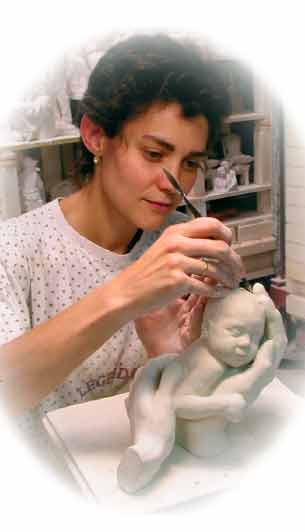 María Angeles Anglada, (1965) was formed professionally at Escuela de Bellas Artes de Zaragoza and initiated her professional career in 1989, immediately after finishing her degree. Inaugurating a small studio of 25 m2 where she developed her first sketches and models.

In 1992 she assisted her first international gift fair in Madrid, presenting a collection of 17 sculptures. Since the first exhibition over 25 years has elapsed, which her artwork has been represented in over 50 fairs nationally and internationally.

The sculptures elaborated by Angeles Anglada characterize for their special personality and character, seeking to reflect a good doses of sensibility and tenderness. Her actual collection is composed of over 150 models, principally allegorical figures to the couple, maternity, friendship and work. Recently we have incorporated a series of animal sculptures, where strength and expressiveness has substituted the usual tenderness.

The process of elaboration of a sculpture starts with the modeling and carving of an original piece. Once finalized a mould is fabricated which permits a true and exact reproduction of the original. All the collection is elaborated in artificial stone, subsequently and finally decorated in bronze, copper, aged ivory, rusty, silver or gold.

Currently, the small studio of 25 m2 has passed to be an artisan workshop with over 1200 m2, where entirely it is performed the complete process of design and manufacturing.

The evolution suffered since the initial of her professional career, has not let her forget the first objective of her company, which is none other to offer a craftsmanship with a high level of modeling and quality but accessible to the grand majority of the public. This has permitted the collection to be present in over 35 countries.

Save products on your wishlist to buy them later or share with your friends.

We use our own and third-party cookies to offer you a better experience and service, according to your browsing habits.

If you continue browsing, we consider that you accept its use. You can get more information in our Cookies Policy.